Casey Rickey, a Junior student at Monte Vista High School got into the printing business early 2011 as an 11 year old, “I stumbled upon a community network on YouTube where graffiti artists would trade their hand-drawn graffiti stickers with one another. They’d upload videos of their ‘sticker packs’ once receiving them from the artist. I thought this was the coolest thing ever, so I began drawing stickers and trading them myself.” But Rickey noticed a gap in the community, no one offered high quality sticker printing catered specifically toward graffiti artists. So he hopped on his computer and began building a website. Within a few weeks, using the community of YouTube followers he had gathered, he was making and designing sticker prints for artists all over the world, “I loved being able to see their artwork turn into something you can physically hold and adhere on a surface.” From there, Rickey expanded into vinyl decals and pin-back buttons, tagging the small company as “CGS Prints” standing for Custom Graffiti Sticker Prints (still in operation today). Visit his site at www.cgsprints.com

After discovering there was a bigger market to advertise his products to, he set out to build his next printing company named Danville City Signs, founded January of 2014, “I wanted to continue to push and expand my skill set. When I began Danville City Signs, I bought my first t-shirt printing press using the money I had made from previous sign and sticker orders and landed my first order within a few days.” Rickey is now on his 3rd screen printing press in just less than 2 years, a whopping 6 color, 6 station press and has since upgraded his overall operation to improve his turnaround time, “Being a high school student and running a fully operational printing is no easy task, but I love how it keeps me and my mind busy. I rarely ever let school get in the way of completing a t-shirt order. Unless it’s finals week, I usually never decline a order, simply readjust my schedule and work harder to make time for both processing orders and studying.”  Visit Danville City Signs at www.danvillecitysigns.com. After realizing it was very difficult to stand out over the competition, Rickey had the epiphany to start a company offering his screen printing services for schools since 50% of his income came from schools exclusively.

Setting focus on his most aspirational business yet, High School Ink, Rickey started preparing for the school year of 15-16 by purchasing his 3rd screen printing press, “My old press put out a quality final product, but setting them up was excruciating. This new press is 3x as big, making production speed up by 3x, and has micro registration making setting up detailed multi-colored jobs a breeze.” Rickey hopes to eventually incorporate an ecommerce website with an online t-shirt designer to make the customers online experience even more enjoyable. 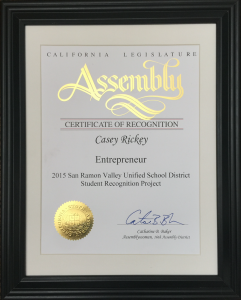